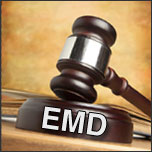 Has your website been hit by Google’s EMD hammer?

Google unleashed a new algorithm update on September 28 that was designed to impact exact match domains by reducing low quality EMD domains in English-US search results. This update appears to be affecting a number of sites across the board as many webmasters have reported being hurt by this update.

What is an EMD?

An EMD is a domain name with keywords included in it. For example, if a business is selling blue widgets, the Exact Match Domain would be: www.bluewidgets.com.

Danny Sullivan, Search Engine Land, wrote about the EMD update stating that like Panda and Penguin, we should expect future refreshes to come:

Google announced the EMD Update, a new filter that tries to ensure that low-quality sites don’t rise high in Google’s search results simply because they have search terms in their domain names. Similar to other filters like Panda, Google says EMD will be updated on a periodic basis. Those hit by it may escape the next EMD update, while others not hit this time could get caught up in the future.

Why would Google devalue EMDs?

The head of Google web spam fighting team and esteemed Google engineer, Matt Cutts, made this comment approximately 2 years ago:

We have looked at the rankings and weights that we give to keyword domains and some people have complained that we’re giving a little too much weight for keywords in domains. And so we have been thinking about adjusting that mix a little bit and sort of turning the knob down within the algorithm so that given two different domains, it wouldn’t necessarily help you as much to have a domain with a bunch of keywords in it.

How to recover from the EMD filter hammer

The Google EMD filter is a periodic filter. According to Danny Sullivan, it isn’t a constantly running filter that goes around looking for bad EMD domains to filter. He states:

It’s designed to be used from time-to-time to ensure that what was filtered out before should continue to be filtered. It also works to catch new things that may have been missed before.

Sullivan’s advice to those suspecting that they were hit by EMD and want to recover is similar to the advice for those hit and trying to recover from Google’s Panda:

Have you seen any changes in your EMD website traffic? If so, do you feel that your site has been unfairly targeted?