What Happened to Google Authorship & What You Need to Know 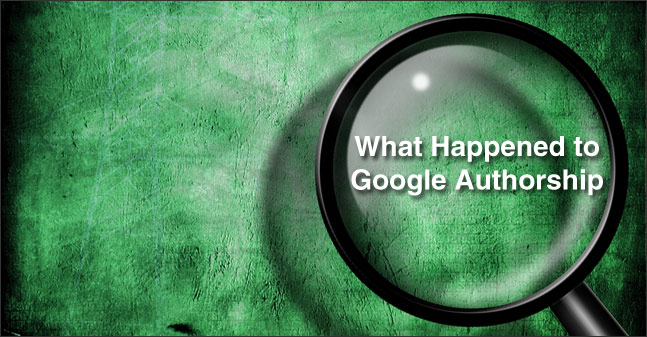 By now you have most likely heard the news that has been echoing across the Internet. Google has stopped all support for Google Authorship. The search engine giant has completely removed it from its search engine results and data from it in Google Search Console (formerly Google Webmaster Tools).

Let’s take a look at what happened to Google Authorship and what you need to know going forward.

The concept of Google Authorship took root in 2007 in a patent that Google filed called Agent Rank. The patent, as reported by Bill Slawski in the article, Google’s Agent Rank / Author Rank Patent Application, was for a system that connected numerous pieces of content with an author’s digital signature. In other words, it would be like a driver’s license for authors identifying their content across the Internet.

The idea behind Author Rank is that the reputation of the content creator or author would influence the results of that content in search results. Author Rank was designed to consider trust and authority signals that pointed to the author’s content and a score could be used to influence rankings.

Agent Rank remained a great idea until the summer of 2011 when Google Plus was announced. Google Plus would be the final step in building the bridge that would connect authors to their content across the Internet.

Why was Google Authorship Important to Authors?

Google Authorship was embraced by many authors and webmasters as way to:

Below is an example of Authorship’s profile photo and rich snippet in Google’s search results prior to the changes on June 25 when Google dropped profile photos and circle count from showing:

A Great Concept – What Went Wrong?

Google Authorship was a great concept and many webmasters and authors took Google’s advice and made the connection between their content and their new Google Plus profiles using the rel=”author” and rel=”me” tags.

Over the next three years, Google tested and tweaked Google Authorship in the search results. The final decision to abandon the project was explained by John Mueller, Webmaster Trends Analyst at Google. He told Mark Traphagen, who along with Eric Enge, reported the reasons for Search Engine Land:

When the earthquake of the news about Google Authorship dropping from search results hit, many people started asking questions. Questions that I heard included “Should I abandon my rel=author tags?”

If you are worried that all your effort setting up and establishing Google Authorship has been a waste of time, please don’t be. Google Authorship remains an extremely valuable tool to help Google know who you are and the content you write. Leaving the rel=author tags will certainly not hurt

John Mueller had this to say when asked if we should remove our authorship code, ”Leaving it is fine, it won’t cause problems (and perhaps your users appreciate being able to find out more about you through your profile too).”

David Amerland is the author Google Semantic Search and recently joined the Stone Temple Consulting episode, The End of the (First) Authorship Era. David made the following statement about Google Authorship,

It’s far from dead. Let’s think of it as having mutated.

There’s no question in my mind that notion of Authorship or Author Rank is far from dead.

Nothing has changed in terms of Google. Google still wants to know world’s information, wants to know what matters to us and will use whatever means it can find to discover that and put that together.

Mark added that anything we can do to assist Google will help. Things that we can do include organizing our websites, making our bylines clear, using author profiles and linking things up.

It is important to note:

Google Authorship has transformed and is no longer supported by Google in search results, Google Webmaster Tools and Google’s Structured Data Testing Tool. The important thing to remember is that Google Authorship continues to be an extremely valuable way for Google to discover who you are and the content you create.

Think of Google Authorship as starting a new chapter in its journey. We don’t know what will actually happen next or in the future, but we do know that the book is too good to put down.

What do you think about Google’s choice to no longer support Google Authorship in search results? Please share your thoughts in the comments below.