In the race for the top search engines in the U.S. for the year end 2012, if you guessed Google as the winner, you would be absolutely correct. The search engine giant received top honors and continued to dominate the top positions of the U.S. search market share according to three different sources.

You may be asking yourself why someone would analyze search engine visitor share at this stage in the search engine game. It may be common knowledge that Google is the Goliath in the search engine arena, however, many business owners want to be sure that they are spending their online marketing dollars on the leader. When it comes to the business that we specialize in, it is important that we have our facts and figures straight.

The logical choice is to invest time and energy on the search engine that is gathering the most visitors. One way to determine this is by studying statistics gathered by leading Internet data collection experts including Experian Hitwise US, comScore and Statcounter. Included below are three different pictures of the leading search engines for the end of 2012. Although all having varying dates, each provides a logical year end report.

The leading search engines in the U.S. for week ending January 5, 2013 according to Experian Hitwise US are shown in the pie chart below by percentages of search share. 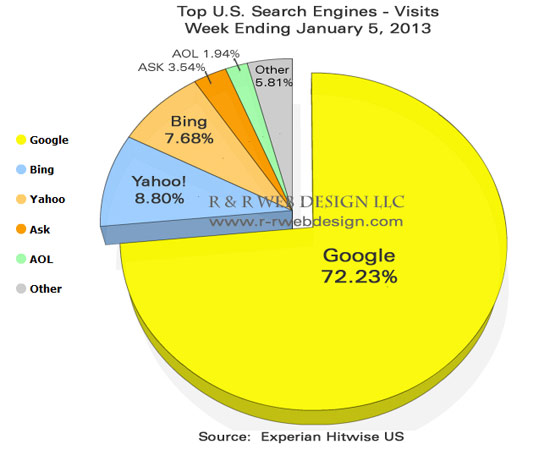 The three different companies, Experian Hitwise US, comScore and Statcounter have painted unique pictures of the leading U.S. search engines market share. In each report, it is clear that Google has won the gold for the year end, with Bing or Microsoft Sites capturing the silver and Yahoo! / Yahoo! Sites, capturing the bronze. Both small and large business owners can use this search engine research to decide where they will invest Internet marketing dollars.

Where you surprised by the results? Do you use more than one search engine when you search online?