It is no secret that the search engine giant, Google, dominates the majority of the U.S. search market share. When a small business is deciding on where to maximize online marketing dollars, it is important to analyze the market and to fish where the fish are swimming. To determine search engine activity, it is essential to examine statistics compiled by the top experts in the collection and analysis of Internet behavior compiled by companies such as comScore, Compete, Statcounter and Hitwise.

The official top U.S. search engines for the month of March 2012 were reported by comScore, a leading expert in the measurement of Internet behavior. The results indicate that the U.S. online population performed an astounding 18.4 billion online searches in March 2012 – a 5% increase over April. Google continues to lead the race with 66.4% or 12.2 billion search inquiries.

Leading Search Engines in the U.S. in March 2012

The leading search engines in the U.S. for March 2012 according to comScore are shown in the pie chart below by percentages of search share. 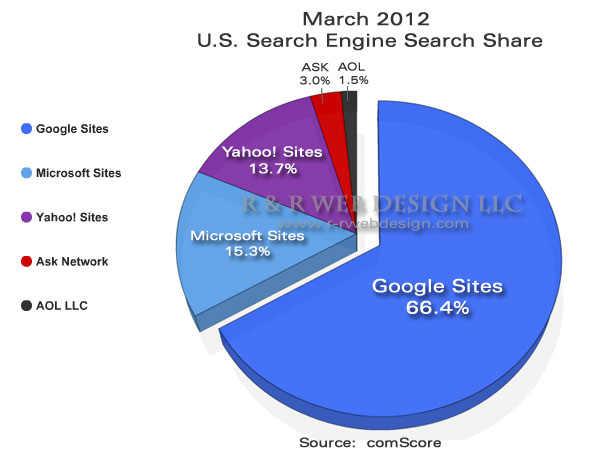 According the Compete’s Web Search Market Share and Volume report, the market share of the major engines varied slightly:

Statcounter provided yet another set of statistics for the U.S. search engine market share:

Hitwise reports on a rolling 4 week interval. The following statistics are for the 4 weeks ending on April 7, 2012 for the industry ‘All Categories‘, ranked by Volume of Searches:

Even though the data varies, it is clear that Google has the number one position locked for the top U.S. search engine for March 2012 according to all reports.

What is your favorite search engine?